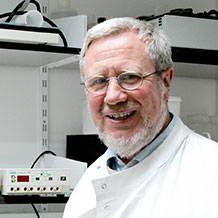 Last year I introduced our “gene clipping” team of undergraduate students in Biology to you. The fantastic five were going to use the funds you donated to probe the basis for stem cells in prostate cancer. October, when they began their research seems such a long time ago, and like much research with a limited time (they have now gone off to prepare for their final examinations) the research went right up to the wire last month when they finished.

Before I let you know a little more about the results to date, I want to tell you of a couple of things which the students found out for, and about themselves.

The first thing was that research is hard and can be frustrating. All of them had prior experience, some more than others, but it did not prepare them for doing experiments where they did not know what result to expect! It’s a bit like stepping off a diving board blindfold, not knowing whether there is water below the board.

Secondly, once the necessary skills had been learned (which took a couple of weeks longer than expected) the real experiments were suddenly quite stressful. Every experiment cost more than £500 and the students did not know the outcome for about 2 weeks. In the taught part of their degree, that didn’t matter – but now it did.

Of course we teach our students to keep good written records of what they have done, but they were unprepared for the detail and length of those required in a first class research lab. No loose pieces of paper, everything bound into a notebook or increasingly electronic. Now that they are finished in the lab, these notebooks become part of the records of the lab, available to all. They must be clear and CORRECT.

Those of you who have visited the laboratory in person only see the ‘finished article’ – there is a lot of hard work, persistence and sometimes good luck involved in getting there.

So what about the results……

Let me remind you of what we were trying to do. We have identified a number of genes, which are implicated in the stem cells of prostate cancer, and could be important in other cancers.

There are 2 ways to see whether we are correct in our assumptions (or hypotheses in scientific language). We can either block the activity of genes which are over-active, or we can restore the activity of genes which have been lost. In these projects we used this exciting new technique (CRISPR) – which I described in a previous report, to cut out the genes. This is the first time that this has been done in prostate stem cells and we were all excited to learn the results.

After the initial treatment, there was an awful waiting time to see whether the infection had been successful.

Each of the 3 genes we clipped affected the cells in different ways. The most spectacular one simply stopped the cells growing: but they were still alive for some time. You can imagine what this would do as a treatment.   The cancers don’t spread, and they gradually die off. We are still some way from that I’m afraid, but this result fits well with those of our previous experiments.

It’s natural to get excited when your ideas work out… but in science you must continually test your ideas, so we have lots more work to do.

As part of the assessment, all of the students had to present their work. Apart from excellent performances, all of them acknowledged the support from Charity Soul. They are now all preparing for their final examinations and two of them have landed prime places next year to study for a PhD in the face of stiff competition from around the UK (and Europe). This was in no small part due to the experience they gained in their Charity Soul funded projects.

Now the rest of us have to start the harder experiments to find out HOW things have happened in these precious edited cells. I’ll tell you more as it happens.