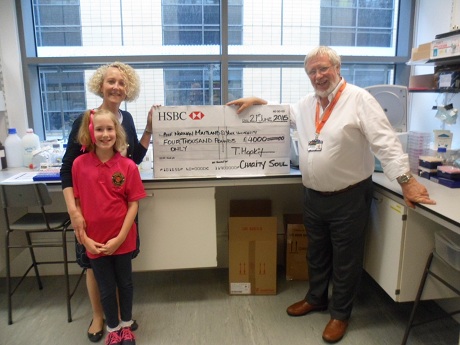 The recent donations made to Charity Soul have surpassed all previous expectations, and has resulted in Charity Soul donating in June a sum of £4,000.0 to Professor Maitland. This presentation was made by Lilly Miller, probably the youngest dj on the soul scene, who along with her mother Rachel and brother Ben was given a tour of the laboratory at York.

This sum of money was the culmination of Charity Soul fundraising events which took place at Huntington, York, Gateshaed, Manhattan Lounge Harrogate and Kellingley Club Knottingley.

This reached a climax at the Whitby Northern Soul weekender, where Charity Soul were allowed to organise fundraising events over three days based at the Buck Inn . A figure of £2,000.0 + was raised which was helped by a very generous contribution made by Steve and Julie of the Buck Inn, which will go towards another tranche of money we will donate to Professor Maitland. With some more fundraising events on our hetic schedule, York Hartlepool and Harrogate, in the next few weeks we have high hope of achieving our target of a cummulative total of donations of £50,000.0 in 2016